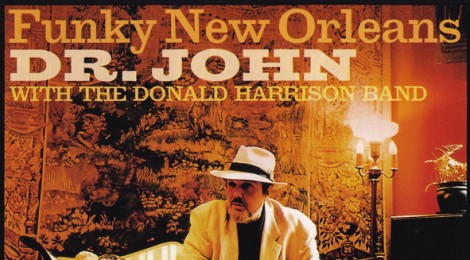 This is one of those posts more likely to appeal to my fellow musicians and in particular the jazzers, but for anyone who hasn’t heard the album Funky New Orleans from Dr John with the Donald Harrison band, I heartily recommend it. Unfortunately it seems to be a rarity in the form that I have it, though cuts from the same dates have been released under the titles “Indian Blues” and “New Orleans Gumbo”. It’s worth searching out any of the tracks for a listen on a date that couples the attitude and swagger of New Orleans’ funky R&B with a top jazz ensemble. The result is electric.

From the fourth cut on the album, Ja-Ki-Mo-Fi-Na-Hay, I’ve jotted down Stephen Scott‘s fabulous solo (at 3.18) – Stephen Scott solo (pdf).

For anyone who spotted my twitter/instagram post of the chords looped at the end of Jaco Pastorius’ Teen Town… I had been trying to work out where the chords in the middle of this version of Ja-Ki-Mo-Fi-Na-Hay had come from. Teen Town was as close as I got… but the similarity is just down to 13 chords moved around a diminished pattern. In Ja-Ki-Mo-Fi-Na-Hay the chords sequence runs down the diminished scale, but other than that, I haven’t gotten any closer to working out why the sequence and the sound is so familiar. Perhaps one of you real jazz heads can enlighten me?!

The form for solos is as follows –

← A Feast for Steely Dan fans
On happiness →