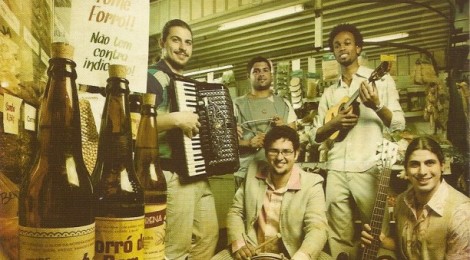 Having read recently an analysis that suggests we stop listening to new music in our early 30s prompted me to share some music new to me that I’ve been enjoying over the past few weeks.  (I’ve got no imminent plans to stop hunting for new sounds to tickle my ears with!)

Although I’ve loved all manner of latin music for many years, I don’t have great in depth knowledge.  If you’d asked me a couple of months ago what Brazilian music had tugged at my ears, I’d have said I was introduced to Jobim and Villa-Lobos as a kid… later discovered Tania Maria…  love George Duke’s fusion album “A Brazilian Love Affair”, which in turn introduced me to Milton Nascimento…  but then I’d have stopped.

Then, a few weeks ago I chanced upon this video –

Apart from being captivated by the beautiful dancing of these two, I’d never come across the dance (Forró)… and this particular track got its hooks in me.  The vocal delivery to me is typically Brazilian, the rhythms too felt familiar, but the accordion wasn’t something I’d associated with Brazilian music until now.  Fortunately in the video comments the question had already been asked and answered and I was able to discover Dona Zaira.

The music on the video above is the title track from their 2012 album Tome Forró.  From what I’ve found out about Forró so far, it seems to me that Dona Zaira have taken it places, elevating something simple and having a lot of fun with it, without losing its essence – it is music to dance to. It’s a very accomplished sound, a well made record and fine musicianship. Now I need to take the time to find out what all the lyrics mean.

To my surprise, the album is available for free – both from their website and at higher resolution along with artwork here.  I’m not sure if this is because the album received some public funding, or if it was released like this just to help the word spread… but I haven’t yet found a way to pay for it!  All I can do in the meantime is help spread the word by encouraging you to have a listen.

← On happiness
No one is born a monster →